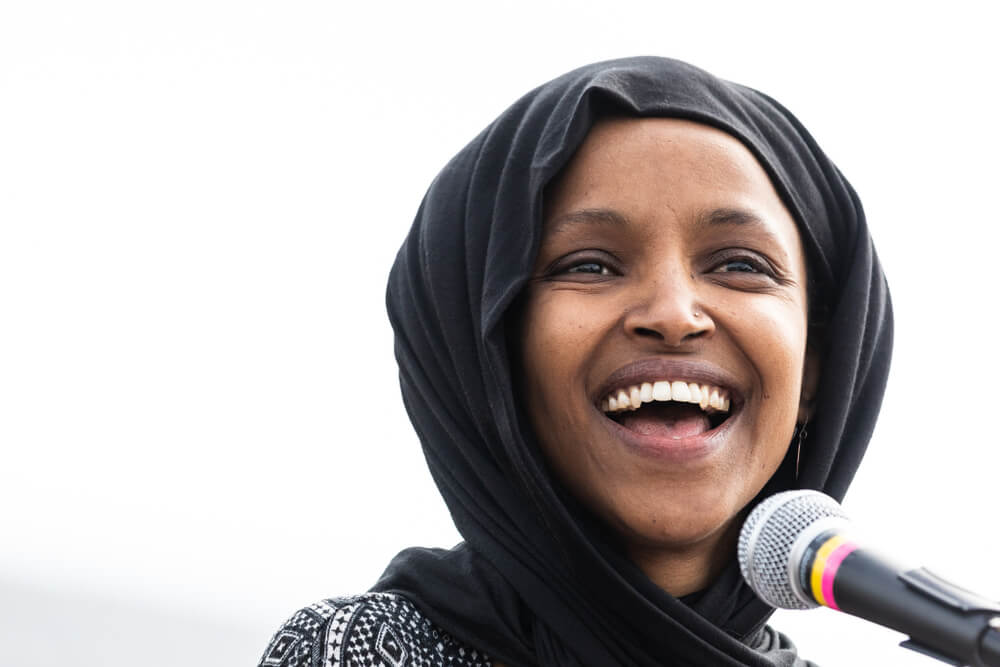 If you look up the word “hypocrite” in the dictionary, you’ll find a picture of Minnesota Congresswoman and “Squad” member Ilhan Omar.

She’s repeatedly called our country’s immigration policies – especially when it comes to deportation – “racist” and “evil.”

All the while, she’s been marred in an on-going scandal of allegations that she married her brother to bend the immigration system.

But in a shocking twist, Omar herself is knee-deep in a plan to deport honest, hard-working Americans.

As first reported by Breitbart, Omar was found earlier this week to have told a political opponent in the past that she needed to be deported — using a rhetorical tactic that Democrats have said is “un-American” and “racist.”

Last Sunday, President Donald Trump tweeted that Omar and three other far-left Democratic congresswomen in the so-called “Squad” should “go back and help fix the totally broken and crime infested places from which they came” and then “come back and show us how it is done.”

He did not call for them to be deported, and later clarified that he meant simply that if they did not like the U.S., they should leave.

And there was Omar… blasting Trump and the immigration policies of our country.

But Omar has, in fact, called for an opponent to be deported. Her tweet, from 2012, was unearthed as a similar tweet from Rep. Rashida Tlaib (D-MN) — one of the other “Squad” members — surfaced, in which she declared “Deport this asshole!” in 2015.

Omar’s tweet read: “we are citizens & can’t be deported, why don’t we deport you to where ever you came from.” 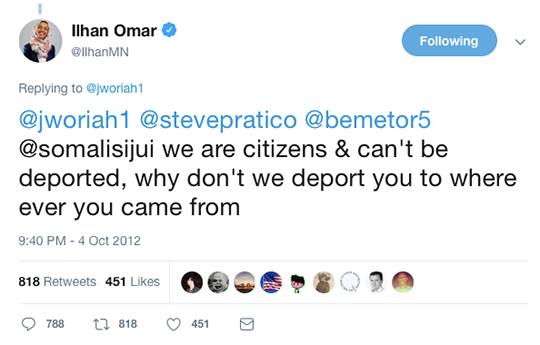 Omar was responding to a thread of comments on an article about how a mayor in Maine said that Somali immigrants to the community should “accept our culture and leave your culture at the door.”

During the course of the debate, Omar defended the right of Somalis not to assimilate: “Most people I know keep and maintain their culture,” she said, adding, “[d]on’t expect us to change either. We have as much right to be here as you.”

Whatever her intentions may have been, Omar and her friends are guilty of the same thing they are accusing President Trump of doing.

What a fraud and hypocrite!